‘Two Darknesses’ selected and translated from the Polish by Tomasz P Krzeszowski and Desmond Graham (Flambard, Newcastle upon Tyne 1994).

Anna Kamieńska (1920-1986) was a prominent member of that particularly distinguished generation of Polish writers who experienced the Second World War as young men and women, many of whom died at the hands of the Nazis. During the war she taught in underground schools in the Lublin region, having studied Education in Warsaw. She continued her studies after the War and subsequently became deeply involved in the literary life of the Polish capital, working on the important monthly magazine Creativity. Her first published poems appeared in 1945 and her last in her Two Darknesses: Selected Poems (1984) from which the poems in this current volume are selected and translated. Her Notebooks appeared posthumously in 1987.

Her work was deeply influenced by the War, the Holocaust, and the suffering of Poland, as well as more personal grief, especially as a result of the early death in 1967 of her husband, Jan Spiewak, also a poet. Kamieńska is undoubtedly a religious poet yet she is also a technically and stylistically adventurous ‘modern’ poet. Although Biblical allusions and aspects of Catholic mysticism pervade her work, there is nothing predictably pietistic about it. She has been called a Catholic Existentialist, and her admiration for the great French ‘patron saint of outsiders’, the unorthodox, Judaeo-Christian mystic Simone Weil who died during the War, is significant. The thirty-five poems in the collection include the major ten-part sequence ‘Job’s Second Happiness’, as well as major poems on Dr Korczak, Edith Stein, Andrei Rublow, the Janów Orchestra and ‘A Short Conversation with Simone Weil’.

Shortly before Kamieńska’s death, which was unexpected, Tomasz Krzeszowski visited her and read her the translations in progress, including the Job poems. She was delighted with the project and gave it her blessing.

Questions on rights to reproduce the translations should be addressed to Desmond Graham (see ‘Contact’).

Those who carry pianos

to the tenth floor

a woman with a hump of nettles

a madwoman pushing a pram

they will all be lifted

Blessed are those who carry

for they shall be lifted

We fear the eyes of animals

we forget the night sky

we can’t address plants and birds by name

our children won’t come across hart and hedgehog running wild

nor the modest forest orchid

we don’t know how to nurse a shoot

to grow into a tree of silence

we don’t greet each other in the street with peace

we don’t cut an overcoat in half

we let the old die in corridors

we have not seen God

in any burning bush

We have learnt to jam effectively the voice of prophets

it is difficult to recognise them today

they are too old or too young

or maybe plump but not resembling even poets

in sandals or shoes on bare feet

in a hat or in the usual halo of death

nobody would give a bent penny for them

and some cannot forgive them a little folly

they speak as though to themselves

they repeat their painful life stories

they always pay more for their bread

they are more solitary than is permitted

they don’t seek salvation for themselves

to be imprisoned in one’s skin

but reach for infinity

to be captive to a particle of time

but to touch eternity

to be hopelessly uncertain

and a fool of hope

to be a needle of trust

and a handful of heat

to breathe in air

choke without a word

and have a nest of ashes

and be full up with hunger

to die without love

and to love through death

flying off into air lightly 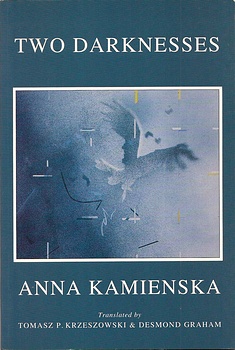 'Two Darknesses' is available to buy - enquire via the Contact page.