Significant events of the twentieth century, be they public and tragic or private and joyful, have inspired Desmond Graham to write this moving collection. The book features a number of elegies to the great poets of both world wars, including Wilfred Owen, Edward Thomas, Ivor Gurney and Keith Douglas. These poems are evocative of the terrible atmosphere of wartime. Also here are speculative biographical pieces on painters and their families. An ‘Old Turner’ rows ‘toothless towards Battersea’, Monet surveys the famous water-lilies, and Rembrandt’s son Titus, reputedly ‘also a painter’ – but none of his work survives – captures on canvas his own short life. The final section of the books is a group of charming poems chronicling the birth and first five years of the life of the poet’s daughter, Milena.

‘It is difficult not to be entertained. Style is as colourful as subject matter as Graham plays with language and form, selecting the ripest of each.’ POETRY WALES

chasing her angina floor to floor

through Harrods me on her arm, greedy

for the big time, Kensington and Christmas,

and that smell of class seeping through the gramophone

and big wood dice for Trumps; she always cheated,

others told me; I listened for the games of Solo

to fall silent, turn into a row;

but she had pegged the cribbage board with death

for partner, tipping out his matchsticks

to sit beside her, six foot

on the far side of everything there was.

Perhaps she was asleep the only time I saw her

bedroom, dark and small enough to be a coffin

where she lay, gaunt against white pillows,

the Sacred Heart above her, out of place;

in any case, she rose next day.

Where the Mediterranean turns in sleep

on deaf rock and they frighten fish

into the harbour mouth banging the boat’s sides

and Polyphemus picked up his gat-toothed rocks

and lunged them after Odysseus,

here, where the tide turns so imperceptibly

you tell by the numbered boats which way

it flows, and behind you Etna sends its harmless

signals to nobody on earth, and the floor stays

and what you see is solid for a while –

Acis loved Galatea, for a little while,

between the lemon groves, the copses

where the nightingale first found its voice,

beside the sea where you walked, Keith,

on the far side, watching the sea bird rise and drop

into its shadow, before any of it happened,

before your Tunis, Tripoli, the many heads

of war watching you, till sea and sky altered

as you were struck, and whatever child 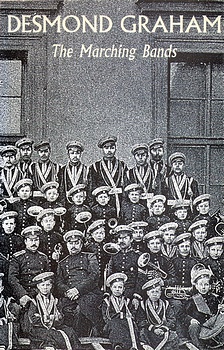 'The Marching Bands' is available here (UK) or here (US).