This, Desmond Graham’s fifth full collection, brings together poems written over twelve years which bear witness to a child’s growth: ‘a thank you certainly’ but also, as he explains in the Author’s note, a work ‘of respect and admiration’. These poems for and about the poet’s daughter Milena take us from the first sightings of an Ultrasound Scan – ‘vertebrae like sweetcorn/toes a spark of light’ – into the deft and learned ways of the infant: ‘She is learning her hands/like a flute player/with the little finger perched/on an inch of thin air/above the last stop’. The crawling baby who looks up at the Cologne cathedral of your knees becomes the toddler we travel and make discoveries with, who leads you into her story; ‘from kitchen to lounge/few words are needed, up the stairs/peer through the window/stagger your way back down’. Synchronised with the growth is an increasing awareness of the transitory nature of the place he has within it. ‘Will I go with all your stories/into your childhood, left behind,/with the lost child you played/and I rescued?’ The learning is two way as the child teaches its reach of imagination, its playing out of care and companionship, and the poet learns how to let go, to be overtaken.

She is learning to let go

She is learning to let go

right up to the last moment

so you still almost have it

till it slips by chance

before you could grasp it back

she can take up

light as a tiger her young

whatever you give her

keep it just on the verges of loss

with a touch of the forefinger

she can peer into departure

learning it up through her fingers

finding at what point

whatever is here goes

where it went does not matter.

She reads upside down posters

She reads upside down posters, notices

adverts on buses held up at the lights,

she reads foreheads, angles of body,

pauses: she can read where silence

starts, where it reaches its climax,

where it needs tilting, her key

working a bad lock and succeeding,

she reads the backs of people going down stairs,

their jumpers and shoulders,

the pile on the carpet as someone

sits down with a problem,

she will read through the faces,

the sounds of embarrassment flickering,

as the full force of disapproval

flashes on the front page

of a look; sometimes, without reading,

she just closes the book. 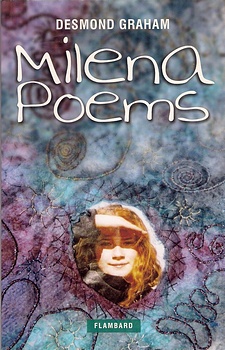 'Milena Poems' is available here (UK) or here (US).