The Lie of Horizons

Desmond Graham’s first full collection of poems, these poems take on subjects as personal as his parents and as public as ‘Mrs Thatcher’s England’. There is a series of incisive satirical poems where street people become Shakespearean characters. Self-portraits by Rembrandt feature in another series and the author’s travels inspire moving poems set in Europe: ‘Kristallnacht’, ‘At the Jewish Cemetery’ and ‘Poems from Poland’. The poems about cities in Britain point to Graham’s fascination with the way history and politics affect the culture and character of the people. Refreshing for its clear-eyed and sympathetic look at the world, ‘The Lie of Horizons’ is a thoroughly enjoyable debut from a fine writer.

‘This is an impressive collection. Graham’s careful use of rhythm, of incidental, never forced rhyme and of understated emotion create a lyrical voice which is refreshingly ironic. He invigorates phrases which hover on the verge of cliché as he does the clichés of his native society, intent on broadening their scope, proving their lie’.
Sinead Garrigan, POETRY OXFORD

The echo in the dome

faster than the tic tac

found the eye, on the floor

of the old Stock Exchange.

After the Big Bang

the cathedral, not shrouded

in smoke this time,

to the stone that Wren

and the poor of London

hauled up to this height

with bare hands, and you

will hear a whispered whirr

of millions passed from one hand

to the other, out of reach.

Dear Wren, in your day

all the cries of poverty

had to pass through stone

to gain a hearing,

now they could fill

the vault of heaven

and be turned off with a switch.

Proving the lie of horizons

we could be under Peggoty’s boat

turning the pages together

all on the good characters

with a bit of sadness

making the most of it,

life what you breathe out

in passing as rings

your childhood was Oliver’s

not asking for more, knuckle rapped,

shoved from behind, head knocked

against walls, at twelve thrown out

to a world which didn’t care

whether you arrived or not,

but, by jingo, if you were late…

then a dead father, a mother

to hold up, fifty odd years

of glancing past your shoulder

have waited in the window

or was it just in case

he caught you out,

or did you look

to your own young face

fum giant with a leather club

and a hollow corner

to your smile, proving

you heard your Jack

climb up though he was quieter

than ivy, and would pretend

for years you had not heard

even when he hacked down

in one blow the beanstalk

and from its leaves the little

Emilies and Davids flew out

you caught them as you fell,

in your warm, beautiful hands. 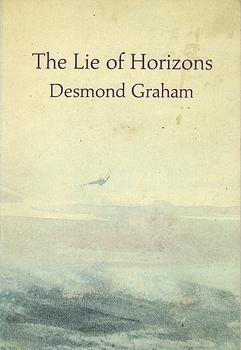 'The Lie of Horizons' is available here (UK) or here (US).