‘The green parakeet/escaped/to the great elm/above the tomb/of Clara Schumann’ – such modulated sound and timing provide the running thread through Desmond Graham’s new collection, which exhibits ‘the perfect management of syntax and juxtaposition’ that Michael W. Thomas and other critics found in his previous book, ‘Heart work’. ‘The Green Parakeet’ offers a darker mood and daring contrasts of form. The first half of the book is an elegiac sequence for an older brother, in which Graham discovers vitality through loss and love through difference. The second half ‘Postcards from Germany’, is a series of short, often elusive and teasing poems about places we cannot know without imagination. Throughout, pleasure and accessibility are brought by humour and invention; openness of mind and of feeling lead us to a knowledge of how much is absent.

‘The relationship between the poet and his brother is captured in a series of vivid poems … what unifies the whole collection is Graham’s concern to capture the quiddity of the loved thing, the essential genius of person and place.’ TLS

Where did that come from

my father good at

was always a loser

too kind to win

and then he tried

too much in love

with what was to be made

to think he’d make it

kicking at the gate

could such a person

have to do with death

you had seen it

in the distance coming

where all of us

of letting it drop

of a rhine barge

a sans souci of sugar

of fork through cake

and a little way ahead

from the empty hatstand 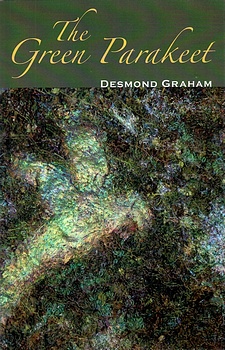 'The Green Parakeet' is available here (UK) or here (US).