A bi-lingual edition, published by the European Centre for Solidarity in 2009, which marked ‘the twentieth anniversary of the Polish Round Table negotiations in 1989, the symbol of the fundamental transformation which was to encompass Central Europe’. The poems are selected, edited and translated by Olga and Wojciech Kubiński, Gdańsk, 2009.

from the Preface by Olga Kubińska:

‘This collection of poems constitutes a veritable chronicle of the last twenty five years of the history of Poland. Graham accurately sketches encountered images, scenes, conversations and events. Avoiding hasty conclusions he builds up a mimetic and at the same time metaphorical representation of Poland. The narration of Graham’s poems involves the creation of patches of light and darkness, the negotiation of grey spaces, skilled movement through contradictions.’

‘Of course the poems are an outsider’s view. But they are made from what I heard, what was given to me over years by the most generous people imaginable.’

They are trying to bury a memory

they have a police-van stuffed with flowers

they take to the refuse heap and leave there

they have concrete paving to show nothing happened:

they put it in place where the flowers were.

Each morning the flowers pick themselves up

and disguised as people make their way

back into town. There they stretch out

on paving, tuck themselves behind crosses

and inscriptions, gather in heaps.

This is too much. With water-cannon

they are thrown across paving.

They are beaten with batons. Tanks

crush down every inch where a flower could grow.

The flowers are back under the ground.

In the morning, disguised as people,

they gather at the memorials and wait.

We waited for the TV

the lines to be rid

the picture to move

the black and white

though this in colour

so long and the same

the stove in the corner

blocked out for summer

some dried flowers in front

till he came and spoke

and he didn’t say

and the whole country

then stood bent over

and the world didn’t falter

they sky didn’t fall in

and what happened after

was never the same 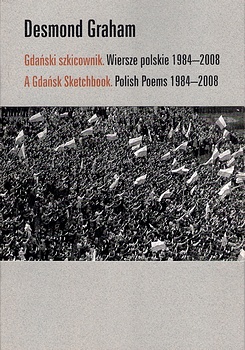 'A Gdańsk Sketchbook. Polish Poems 1984-2008' is available to buy - enquire via the Contact page.