The tightrope walker in the cover painting by Macke is symbolic of the author’s point of view. It is a humorous acknowledgement of the precarious position of the artist in our times, and a hint at the poet’s predilection for balancing both personal and public concerns. The former are exemplified by some of the more light hearted and affectionate poems here, such as ‘My Sister Marrying Dirk Bogarde’; the latter appear in the ambitious eight part sequence ‘The West End, Newcastle upon Tyne’, where colourful characters from modern Newcastle are related to their archetypal Shakespearean counterparts. World War Two remains an abiding obsession in ‘The Eisenberg Elegies’ and the moving elegy ‘To Lore’. Also notable here are the poems inspired by the author’s travels in Australia, Germany and the USA.

‘These are poems which – as the collection’s title and cover illustration of a tightrope walker suggests – are about the precariousness of existence and human relationships and the power of love and human sympathy to keep us in balance. It’s a strong collection with a wit braced by an underlying seriousness.’ POETRY WALES

‘The cover’s intimations of elegance, balance and poise are appropriate to a collection in which Graham seldom wobbles and never once christens the safety net. He comes at cultural classics from unexpected angles…. His breadth of reference enables him to embrace both complexity and playfulness with room enough to spare for a sense of poignancy and affection.’ Claire Powell

‘I am Cinna the poet’

onto the Somme, with a tin hat,

pocket book of poems and a Gloucester

accent, and he said it so quietly,

under his breath, not even his best chum

heard it; and the gas blew him, good lungs

and all, way back to The General,

the longest hospital in Europe,

and there he talked to Beethoven, he knew it –

and this was the end, hallucination, turning to torture,

madness – no need now for the mob to take action,

the whole crowd were far too well rehearsed,

saw to it right through his head,

and he shouted through twenty more years,

Dancing in the Dark

Once, in a Village Hall,

and the teacher’s call

at distance on parquet

knowing if they touch they fall.

Now you cling to keep up;

lean, heavy on my arm,

although no weight at all;

shuffle, as I do across sheer drops,

I brought anemones from Nolde’s

or purple against black.

You teach me your new steps –

me, that bit faster for your part,

but not so dark. 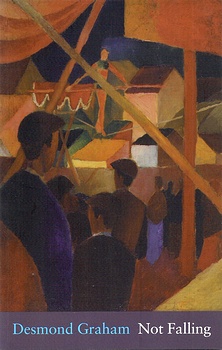 'Not Falling' is available here (UK) or here (US).