Making Poems and their Meanings

In these lectures published by Bloodaxe in 2007, Desmond Graham reflects on the nourishment on which the making of poems depends, how far the poet can control the readers’ understanding, and whether poetry really is no less important than bread.

Starting with David Jones’ ‘In Parenthesis’ and moving through Keith Douglas and Wilfred Owen, this lecture celebrates how the making of poetry is nourished by unsung companions: the supportive editor, the thoughtful friend and the clear-headed reader.

Looking in detail at the role of metre in enabling us to hear Shakespeare’s voice, the weighing of pronouns by Wordsworth to show us direction, the orchestration of sound through which George Herbert leads us, and the consequences of punctuation in Ivor Gurney, this lecture reveals the secret syntax which poet and reader hear whether they know it or not.

‘No Less Than Bread’

Starting with Tadeusz Rożewicz and Miklós Radnóti, and moving from post-war European poetry back to David Jones’ ‘In Parnethesis’, this final lecture asks what poems mean, what knowledge they carry, and how to read them to find out.

These lectures are the fourth in the Bloodaxe Poetry Lectures Series. 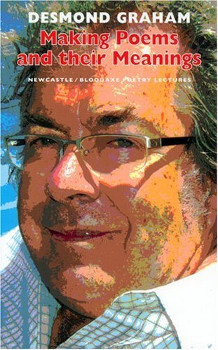 'Making Poems and their Meanings' is available here (UK) or here (US).