‘The Miron poems originate in Graham’s annual trip to Eisenberg, in Southern Germany. Miron himself was a Ukrainian who had spent the war there, labouring in the farm of a benevolent German family. Graham was fascinated to find a foreign labourer whose experience “was outside the mainstream of brutality we rightly recall from the war…I was concerned that someone had lived there and disappeared”.

… if, as Pasternak believed, or so I have read, each has a soul,

immortal, which we leave outside, to the remembering,

our lives, our selves, passed on outside, in others,

then you lost your soul here, Miron, and I cannot give it back;

but one thing we never know, none of us, we have in common –

sleeping under the same roof forty years later, I dream here too:

so, Miron, I will give back some dreams, not yours, not mine,

just something made-up, give them to you as a shadow which won’t fit,

no matter, anyone seeing it will know you were here

I dreamt I had a little child,

bouncing my knees for him

and opening them. He fell through.

I made a swing for him,

of the barn, rope stolen,

plank seat, I swung him back

let go, and the seat was empty,

I made a sledge for him,

right to the top, sat with him

on my coat sleeve, tight.

I do not understand, but somewhere,

before the slope’s foot he vanished.

I dreamt I had a little child

took him to be with me,

so he would not go

I dreamt with him,

held him close all night,

and woke with no one beside me.

I dreamt I had a child

I took him in my arms

held tight and breathed in

tighter, and tighter, till a band

of iron held us in my chest.

He does not leave me. 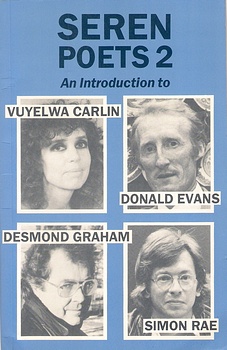 'Seren Poets 2' is available to buy - enquire via the Contact page.